Some people know they want to be involved in campaigns from the onset; others find themselves in the campaign world in a less traditional way. Andrea Cervone falls into the latter category. While seeking a career in journalism, Andrea’s partner, Ted Terry, was working as finance director for John Barrow. This led to a very part-time position in communications on Steve Oppenheimer’s campaign for Public Service Commission, and it took off from there.

What began as op-eds, newsletters, and campaign photography blossomed into a career in communications and campaign management. Andrea and Ted  helped start the Nonpartisan Candidate Training at AAAJ Atlanta (which Asian American Advocacy Fund took over in 2019). It started as a small operation, just four candidates in an office on Buford Highway learning about campaign training, with Andrea focusing on comms and Ted handling finance and other client side training aspects. Most recently, Andrea worked on Felicia Moore’s mayoral campaign. 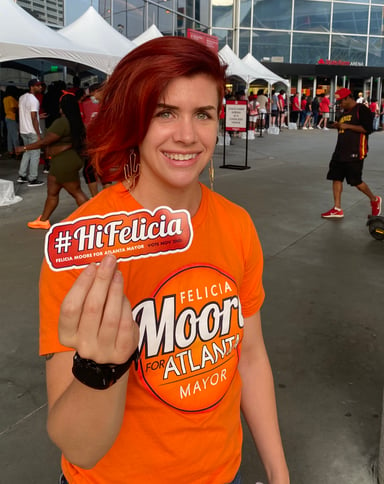 From talking to Andrea, it seems that one of her biggest strengths is creativity – she takes seemingly unconventional ideas and turns them into lucrative outcomes.

“We wrote a persuasion script [for Felicia] and included that script across all platforms – call time, door-to-door, emails, and texts, which resulted in a higher rate of response than any other text sent. This was significantly more labor intensive on the back end because it was testing voter interest areas, but we also included this sampling in Atlanta-centric emails. All of our data was connected and messaging was consistent.”

The result? A 12 point swing in favor of Moore.

In addition to utilizing persuasion to increase an uptick in support for Moore, Andrea also had the idea for a guerrilla art campaign – “Hi, Felicia!” This marriage of her creative background and political career was a fun way to engage young voters around Atlanta. 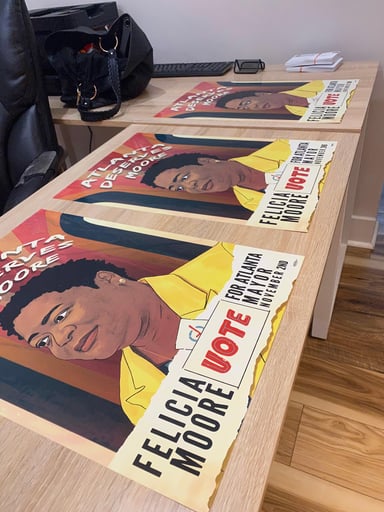 So what’s next for Andrea?

“I love Georgia, but I’d love to work on something outside the state so that I can see how other states do things. I’d like to be able to take other states’ tactics in mobilization, persuasion, organizing, fundraising, etc., and then implement that in Georgia.”

Andrea said to keep an eye out, as 2022 will be a divisive and decisive year for Democrats, and the Atlanta mayoral election could be a forecast for many 2022 races.

We’re excited to see what’s next for Andrea, especially the influence she'll have on Georgia and its elections in the coming years.