Madison Scalf discovered her love of campaigns in 2018. She grew up in a VA-01, an R+8 district, which led her to want to be a change maker. Madison wanted to find a way to work toward progress, so she started locally, working first as an organizer with Vangie Williams (2018) and followed shortly as Campaign Manager for Stan Scott (2019). Her experience with Vangie really showed Madison what good campaigning could do.

"Vangie's district is a very conservative area – I noticed that some people around me didn't have motivation because it didn't seem worth it in the larger picture of Democratic political strategy”.

But Madison thought otherwise. Under her leadership, around 200 volunteers were recruited and they worked 110%. The result was receiving 8,000 more votes than expected.

As CM for Caitlin Coakley in the 2021 cycle, Madison had to stretch herself across multiple verticals.  Noting that being open minded and having passion that outweighs her experience are her biggest strength, she recalls, "We didn't have a comms director or finance director, so that all fell to me. I learned how to do social media marketing, and we turned out the same number of voters but received 4,000 more votes than the previous candidate.  Those aren't Madison's only strengths, though. She's not afraid to ask for help or to face challenges head-on. "Call time is tough. Many candidates don't understand what is expected when they choose to run, which makes fundraising a huge challenge." Despite that, Madison helped Coakley raise upwards of $50,000 in 2021.

A true hustler, having worked on all these campaigns while also attending community college and ultimately reaching her dream school of William and Mary, Madison says she's focusing on school for now. Unsurprisingly, she won't be done then either. "Once I graduate from William and Mary, I'd like to go on and get my J.D., as well as a Master of Public Policy."

Check back for more on what Madison may be up to in the coming months and years! 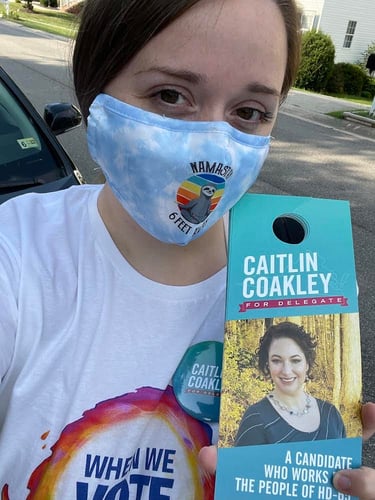